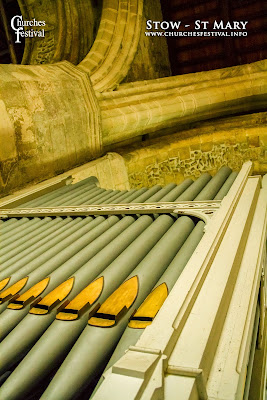 We have a wonderful update from one of our organisers Heather Paul on the success of the Organ Trail this year (the trail is made possible by the Lincolnshire Organists Association):

The organ trails proved popular this year.  People turned up ready to sit down to listen rather than just walk round and go.  One of our organists said he had to be careful not to play the same music at different churches as the organ enthusiasts were following him around!  We timed the two recitals (both very different) at Stow to attract diners in after lunch in the Cross Keys, and it seemed to work! Perhaps my poster in the pub helped!

There were good audiences on the second weekend and our organist at Grasby said the church was full as it seems to be every year!

Part of the fun was talking to people who love organs, and some interesting discussions can arise. Also meeting by chance other organists taking the opportunity to play organs in churches normally kept locked.

At East Barkwith an organist going around with his wife played for about half an hour, ending with a mother and three young children, and a dog on a lead, enjoying "How much is that doggie in the window" and other requests!

Good to see people enjoying their church visits for many different reasons and going home happy! It really was 2 good weekends!

Liz Harris at Owmby by Spital added that their event was also a success: "Eleven on Saturday seemed to go down very well.  We had quite a turn out for the recital and the organist gave us some details about what he was playing and even played one of his own works.  All in all, a very successful day."

THE WEST LINDSEY CHURCHES FESTIVAL 2022 IS ON! Up to 100 churches, 7/8th and 14/15th May. We are so excited! We really want lots of people to visit these churches, that have had to close to visitors for around 18 months. Visit the Brochure page to view the PDF.